Kroenke Out- A Story of Indifferent Owners | turf Football

Kroenke Out- A Story of Indifferent Owners

The #KroenkeOut and #WeCareDoYou movements have garnered massive support due to Arsenal FC owner Stan Kroenke's indifference towards the club. Let's look at the reasons for this growing agitation.

Enos Stanley Kroenke is the owner of Kroenke Sports and Entertainment(KSE) which is the holding company of the Los Angeles Rams of the NFL, Denver Nuggets of the NBA, Colorado Avalanche of the NHL, Colorado Rapids of Major League Soccer, Colorado Mammoth of the National Lacrosse League, the Los Angeles Gladiators of the Overwatch League, the newly formed Los Angeles Guerrillas of the Call of Duty League and The English Premier League’s Arsenal Football Club. The #KroenkeOut movement has amassed a lot of attention over the years with his indifference towards the club angering the supporters. This is a timeline of how the American Billionaire took over Arsenal FC.

April 13, 2011 - After the recent increase in shares, KSE had to make a mandatory offer of a total buy-out. Alisher Usmanov prevented that.

May 19, 2017 – Usmanov launched a bid of his own for a total buy out worth around £1billion. However, he failed in his attempt.

August 7, 2018 – Usmanov accepted an offer from Stan of a little more than £550million for his 30.04 per cent stake. KSE announced they were taking over complete control.

“A dreadful day for Arsenal FC”

This was met with criticism from Arsenal Fans all over the world. Arsenal Supporter’s Club (AST) called it “A Dreadful Day.” Usmanov himself said farewell with a cryptic message stating that Arsenal “could be” the best club in the world, of course, not in the hands of the American.

How much money has been invested?

Stan Kroenke has a net worth of 8.3 Billion USD- One of the richest owners in the Premier League yet he hasn’t invested a dollar in Arsenal Football Club, neither in Owner’s debt nor in equity financing. Arsenal is a completely self-sustained business earning revenue from Broadcasting, match days and commercial activities. In comparison, Manchester City owner Sheikh Mansour and Chelsea Owner Roman Abramovich have invested over a billion dollars each. Stan Kroenke isn’t unwilling to invest money though, just not in the  Arsenal Football Club. He has invested large sums of money in his NHL, NFL and NBA teams including a 1.6 Billion USD investment in a new stadium for the St. Louis Rams. 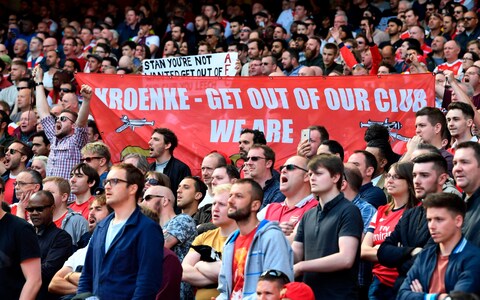 How much money has been taken out?

Stan Kroenke has taken a considerable amount of money from the club. Since joining the board of directors in 2008, he gets paid £25,000 per year in the form of flat directors' emoluments for each full season worked. (Except he got 17,000 in his first season since he joined late). In December 2013, his son Josh Kroenke also joined the board of directors and has been taking 25,000 for himself for each full season worked. Stan Kroenke even pockets the money for rendering “Strategic and Advisory Services”, getting £3million for the rendering of these services, credited to KSE n 2013/14. It was given again in the following year except for this time it was shown as outstanding payment. It stopped in 201515/16 and has not been shown ever since.

Ever since the 100% Privatisation of Arsenal Football Club took place in 2018, all transparency has been forgone. There are no Annual Glossary reports and any transactions between the Kroenke’s and Arsenal FC are harder than ever to trace. For example, the Directors’ salary paid to them that was clearly mentioned up until 2016/17 was not clearly shown after the takeover.

On July 15, 2019, Influential Arsenal Supporter Groups, Blogs and magazines joined hands to start a petition demanding a change at the top. A total of 16 signatories released a public statement through a powerful letter demanding Stan Kroenke to step down. The campaign was titled #WeCareDoYou and garnered over 100,000 signatures in the summer. “Off the pitch, fans have never felt more marginalised, less listened to or valued,” read the joint statement.

On 24 November 2019, a second statement was released after a dismal run under former head coach Unai Emery. The statement outlined how the owners just wouldn’t listen despite repeated agitation and protests.

Fans can sign the petition and read the full statements at https://www.wecaredoyou.co.uk/

Stan’s son Josh Kroenke, however, has provided some hope that the owners still care about Arsenal. He has been heavily involved with Edu, Vinai and former Head of Football and recently let go Raul Sanhelli, behind the scenes and has been seen at almost every game. He has been much more involved in the ongoings of this club than his father and has given several statements and interviews as well as reiterated that Mikel Arteta, First Team Manager of Arsenal Football Club will be fully backed.

Current Situation and What’s Next

The criticism of Kroenke’s indifference has not stopped, with Arsenal fans organising an Airplane that flew over Villa Park in the Gunners’ 1-0 loss to Aston Villa, which read “Back Arteta, Kroenke Out”. However, Stan Kroenke has apparently promised a cash injection of up to $2 billion to ease the pressure of the Coronavirus Pandemic, which came shortly before Arsenal laid off 55 employees as redundancies. What is left for us to see is how Arsenal performs in this year’s Transfer Window, failing which one can expect a lot more anger, agitation and Protests. Through all of this, one unavoidable question comes to light- The Arsenal Fans care, does Stan Kroenke?