Sevilla: The Magic of Lopetegui

Sevilla, after having a complete summer overhaul performed brilliantly under Julen Lopetegui this season. Here's an analysis of how Lopetegui transformed Sevilla.

It seemed like Julen Lopetegui’s career was finished after he was sacked twice in 6 months last year. A controversial departure from the Spanish National side followed by a forgetful stint at Real Madrid put Lopetegui in a situation where no one was betting for him, except Sevilla. The club chose the ex-Spanish goalkeeper as the man to lead them in their rebuilding phase after several major club departures in the summer and lead he did.

Sevilla had a great season. They were in the top 4 all season long and ended up finishing at 4th with 70 points, bettering their 59 points from last season. Moreover, they are still intact in the Europa League and are looking to win the competition for the first time since their early decade dominance. A huge chunk of credit for Sevilla’s success this season has to go to Lopetegui for getting the best out of a comparatively weaker side on paper. Sevilla were one of the best-structured sides in the league and you could see the work that Lopetegui has put in, in their gameplay.

In this article, we will analyse how different playing positions contributed to the Sevilla system this season in detail.

One of Lopetegui’s first acts as the Sevilla manager was a complete overhaul in defense. The likes of Mercado, Carrico, and Simon Kjaer were shown the door while Diego Carlos and Jules Kounde were brought in. Carlos was hailed as one of the best CBs of the league this season. Both of them were integral to Sevilla’s system this season and this can be seen in the number of games they played.

Kounde, especially had a lot of responsibility on his shoulders as he had to cover for the right-wing back Jesus Navas, who was often found higher up the pitch while being in a back four system. He showed a lot of maturity for a 21-year old and swept majority of the threats in a commendable manner throughout the season.

Carlos, on the other hand, did have decent support from Reguilon but he still had a job to do and he did it as good as anybody could have. He was the last man in the defense and was rock-solid. 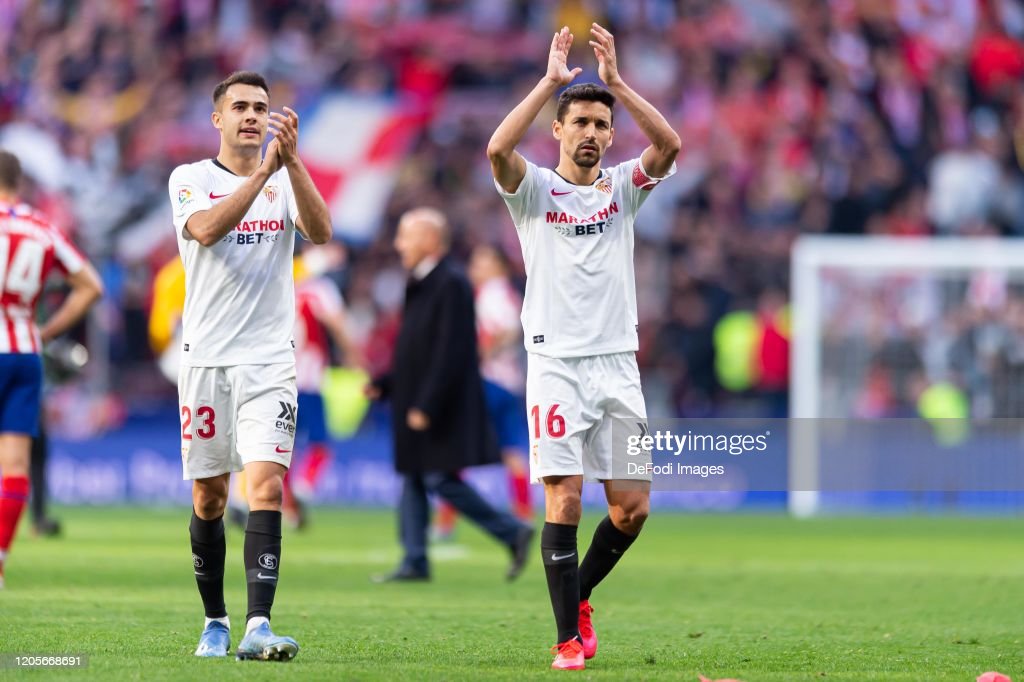 Full-backs of Sevilla had a lot of attacking independence in Pablo Machin’s back 5 system last season. When Lopetegui converted to a 4-3-3, it seemed like the roles of full-backs will be reduced significantly in the new era but the complete opposite happened. The full-backs ended up becoming the most important cogs in this Sevilla machine and ran everything.

Sergio Reguilon and Jesus Navas couldn’t have been more different from each other, while one is a 34-year old veteran who loves to attack, the other is 23-year old up and coming defensively solid youngster. This contrast is what gave Sevilla the much needed balance.

The Sevilla legend was integral to his side’s fortune for the nth time in his career this season. Sevilla has been the side with the most number of crosses this season and Navas leads that stat in his side with more than 7 crosses per game. The scary thing is that Navas’ accuracy is great as well. He has over 30 percent accuracy which means that he has at least 2 accurate crosses every game for Luuk De Jong to net in.

Crosses are just one aspect of Navas’ game, he is just as good running at defenses as well. Navas attracts defenders, creative space for midfielders to run in. It wouldn’t be a reach to say that Navas is Sevilla’s top most attacking threat along with Ocampos and the fact that the Sevilla attack crumbles whenever Navas has a bad game, attests to it.

Reguilon had a breakthrough season with Real Madrid under Julen Lopetegui. He reunited with his boss on loan last summer and truly unleashed this season. Reguilon was a wall defensively this season. It was an insurmountable task to get past him for even the best wingers of the league. That combined with his decent crossing in attack made him a force to be reckoned with. He just like Navas had more than 30 percent cross accuracy given that he did have a fewer number of them attempted.

Unlike Navas though, Reguilon isn’t the kind of player who runs behind defenses and cuts back in, Reguilon’s major job in the attack was to carry the ball from the defense and lay it on to Ocampos at the right time. He did chip in with goal contributions(2 goals and 4 assists) once in a while though.

The midfield of Sevilla comprised of Juan Jordan, Fernando, Nemanja Gudelj and Ever Banega. While Fernando was a mainstay, the remaining 2 midfield positions were switched between the other 3. Since Sevilla’s game heavily relied on the wings and transition play, the midfielders had less of a job to do. They still were important though.

Fernando occasionally dropped in defense to complete a back 3 and support the 2 CBs. While Banega and Jordan had the job to insert control into the game and swiftly pass the ball from defense to attack. The wingers, just like the full-backs had a key role to play in this Sevilla side. While the world was watching the likes of Eden Hazard, Antoine Griezmann and Joao Felix, Lucas Ocampos ended up becoming the attacking signing of the season in La Liga. He had 14 goals and 3 assists in the 33 games he played and was a constant attacking threat all season long.

Ocampos along with Suso and Munir were found in the box a lot of the times because of the overlapping fullbacks and thus along with chance creation had the job to net the ball in as well. Suso and Ocampos were threats from set-pieces as well.

To be honest, Luuk De Jong had an average season. He underperformed his xG by more than 3 points which is poor for the main target man of a top 4 team, to say the least. What De Jong provided to the side though was a constant aerial presence in the box. He was there to receive Reguilon’s and Navas’ crosses for the entire game. The attacking threat that he possessed forced the opposition to focus on him in set pieces and while defending crosses which allowed players like Ocampos and Suso to attack the ball. 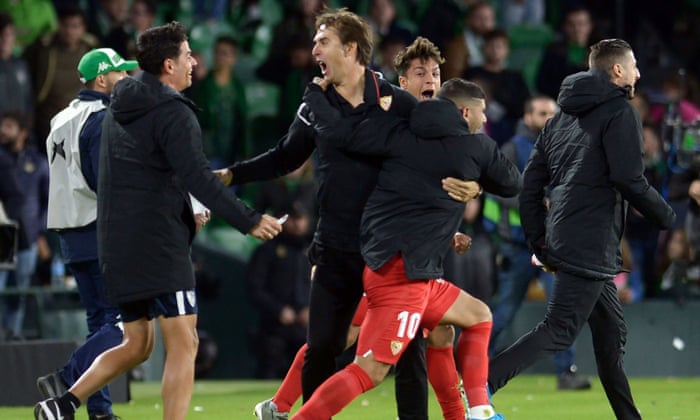 Lopetegui has a really flexible system in Sevilla. Players are constantly switching positions while realizing the roles they have to play in the team. Every position has an important element to contribute to Lopetegui’s system and this team play is what gave Sevilla their success this season. Kudos to the Spaniard for proving that he in fact belongs to that top tier of European coaches.